skip to main | skip to sidebar
satellite view from PMNM
E komo mai; welcome! Midway Atoll National Wildlife Refuge is surrounded by a lei of foam in the middle of the North Pacific; it's a beautiful, special place.

Not only are there albatross on Midway, but many other interesting kinds of wildlife, both on the land and in the sea. Please enjoy exploring FOAM, an educational blog actively done while on Midway from May through August 2010. Posts are added from off-Midway, as information becomes available. If you're interested in a particular topic, please use the search box or the alphabetical list of "labels" along the left side of the blog page.

Take a "Virtual Visit" to Midway

Who wouldn't want to visit Midway Atoll NWR, the site of the world's largest Laysan Albatross nesting colony?!  At the moment, there are no eco-tourism opportunities on the Atoll, but there is a way to visit the Refuge virtually --> "like" Friends of Midway Atoll NWR Facebook Page.  Lots of pictures and updates!
Posted by Barb at 8:47 AM 0 comments

You don't believe me?  Well take a look at this --
During his visit to Midway Atoll NWR, Wyland painted a mural on Charlie Barracks (near L7 on the map.). The video clip above is a time lapse taken during the painting project.  Can you see the Hawaiian Green Sea Turtle hovering over some limu, or seaweed, as well as a graceful Hawaiian Monk Seal?  And there they are, a pair of huge dancing Laysan Albatross.  If they were real, I wonder how loud their song would be ?!
(photos: Wyland Earle Midway Atoll 2011)
Posted by Barb at 7:07 AM 2 comments

Previously, in this blog, we've mentioned our neighbor Hawaiian Island to the northwest, Kure Atoll:
Now we "tern" our attention to our neighbor to the southeast, Tern Island Field Station within French Frigate Shoals.

Visit the French Frigate Shoals: Kānemilohaʻi, Tern Island Blog.  Beginning in December, a new crew will be doing oceanic bird work, habitat restoration, marine debris monitoring and other projects over the winter and spring seasons.  During the summer, there will be additional work with Hawaiian Green Sea Turtles and Hawaiian Monk Seals  You can follow all the happenings on the blog.

It's the end of November and the albatross are back; hurray!!!

Worldwide, most of the Black-footed Albatross (BFAL) and Laysan Albatross (LAAL) live in the Northwestern Hawaiian Islands.  That's 95% of the global population of BFALs and even more, 99%, for the LAALs.  Therefore, it's important to keep track of how well albatross are doing in the NW Hawaiian Islands.

Before we really get into this season, let's take a look back at how well the albatross chicks did last year.  Specifically, let's look at how well they survived the heavy winter storms and the March Japan tsunami; the following numbers are provided by Dr. Lindsay Young, Wildlife Biologist with Pacific Rim Conservation.

There just might be Humpback Whales hanging around Midway during the winter.

We've known for a long time that in late fall Humpbacks travel from the Alaska area to main Hawaiian islands, especially Maui.  During their winter in Hawai`i, these whales do family things: mate, give birth and take care of little whales...and the mature males sing.

Now there's scientific evidence showing that maybe the whole Hawaiian archipelago, from the Big Island of Hawai`i all the way to Kure Atoll, is the site of one, big winter-time Humpback Whale "family reunion."  In 2006 scientists began to see more whales around the small islands, atolls and coral reefs northwest of Honolulu.  Hhhhmmmm, researchers from the Hawai`i Institute of Marine Biology, the Joint Institute for Marine & Atmospheric Research, as well as NOAA's Coral Reef Ecosystem Division decided to find out more.  So, in 2008 they tuned their ears to listen for whale song.

Make that EARs, or ecological acoustic recorders.  About ten EARs were placed at various places along the island chain.  Whale songs were recorded at all locations!  The picture at the right is called a "spectrogram."  Its horizontal axis represents 30 seconds of time, and the vertical axis is the frequency, or pitch of the whale sound.  I think the spectrogram shows a lot of little blips of sound at different pitches; what do you think?

Aloha!  Rather than write my own update about tsunami-related news, I've decided to link you directly to sources reporting on Midway, as well as other atolls in the NW Hawaiian Islands:
And look at this aerial shot of Midway's main street almost 60 years ago! - photosafaris.com/midway-atoll/post-wwii-history/ -- 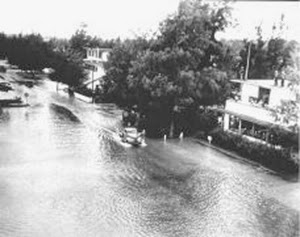 Midway Island Flooded by 1952 Kamchatka Tsunami Tsunami Generated by Earthquake of Nov. 4, 1952, Kamchatka Peninsula, USSR. Flooded street resulting from tsunami on Midway Island. The tsunami was generated by a magnitude 8.2 earthquake on Kamchatka where it caused severe damage. The tsunami then struck Midway about 3,000 km away, the Hawaiian Islands 5,200 km away, and other areas in the Pacific. Midway reportedly was covered with 1 m of water. Photograph Credit: U.S. Navy.
Posted by Barb at 8:45 AM 0 comments

The resilience of life: post-tsunami reflections

We're all relieved to hear the USFWS announcement that Wisdom has returned safely to her nest after the tsunami, and was seen feeding her chick. Although the parents of the STAL chick on Eastern have not yet been sighted, USFWS is hopeful that they are still at sea gathering food and, like Wisdom, will eventually return.

Wisdom's return serves as a reminder that, while this year's cohort of chicks was undoubtedly severely impacted by the tsunami and the two heavy winter storms this year, there are still hundreds of thousands of breeding adults who survived and will continue to return to Midway and raise new chicks for years to come.


When I look at the raw numbers, it seems strange that we spent so many hours rescuing what seems like a tiny handful of birds. USFWS rescued at least 50 waterlogged adult albatrosses from the lagoon, and USFWS and visitors alike freed over 200 trapped birds; however those numbers appear insignificant compared to the estimated 110,000 chicks and 2,000 adults thought to have been lost due to the tsunami and the severe winter storms of January and February.


All those involved in the rescue efforts walked away with wounds on our hearts from seeing all the birds we couldn't save, but what we will strive to remember instead are the wounds on our arms from the bites of the frightened birds that we did save. I can hardly express the comfort I took and the satisfaction I felt in lifting a newly-freed chick, still covered in wood chips, from the debris and carrying it to safety. As I remember that feeling, it reminds me that, in the face of disaster, both the best and the least we can do is to try to save as many as we can.
Posted by Anna at 10:40 AM 3 comments

Please help support our mission as an education blog by responding to this survey; mahalo! -- What group do you belong to?

Sources for pictures used in this blog are given in one of two ways: by linking the picture to its source, or by giving information about the picture in its caption. If neither of these two identifiers is present, Barb Mayer is the photographer.